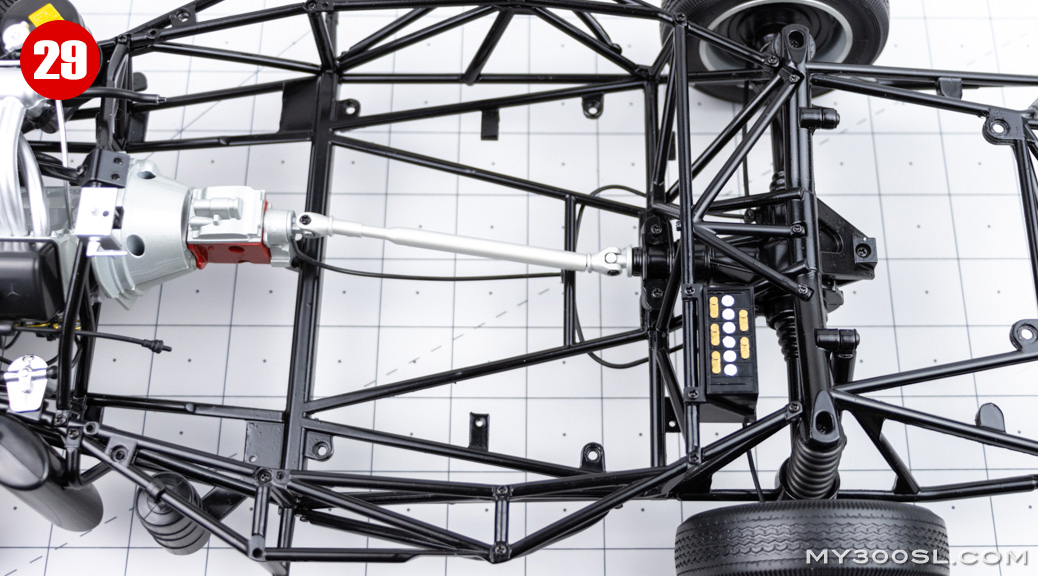 “Fit the driveshaft, two rear axle guards and the battery to the back of the main chassis.”

Materials: While the Battery and Battery Holder are plastic, the rest of these parts are metal.

The Driveshaft Axle Guards and Battery

Retrieve your Chassis assembly. Position long crossbar of the Rear Axle Guard 1 across the Chassis (in front of the rear axle) as shown, and secure into place with two (2) GM screws. I took closeups of each end of this Rear Axle Guard 1 where the GM screws go, but I somehow didn’t take pictures with the screws installed. So, please pretend they are there: From underneath, secure the bottom of the Rear Axle Guard 1 to the lower Chassis with two (2) HM screws, as shown.

After installing the top screws, the bottom mounts of this Rear Axle Guard 1 were a tiny bit towards the rear of the car: This means, once again, I had to put some force on the Rear Axle Guard 1 to get the holes lined up. It wasn’t hard, just annoying: Fit the central joint of the Rear Axle Guard 2 to the center of Rear Guard Axle 1 and secure it with one (1) EM screw, as shown: Secure the three tubes of the Rear Axle Guard 2 to this large crossbar of the Chassis assembly with three (3) EM screws.

The two outer screws of this step were more difficult to install than the middle one, even with oil: Place the Battery into the Battery Holder as shown. The screw holes will only line up it this is fitted correctly.

I used my Metallic Silver and Gold Sharpies to give my Battery some color. It probably will never be seen again, but it was fun anyway: Here it is installed in the Battery Holder: Secure these parts together from below with two (2) MP screws: Fit the tabs of the Battery Holder to this location on the Rear Axle Guard 1 and secure it with two (2) CM screws, as shown: The gearbox and differential are offset from each other, so this Driveshaft will be at a slight angle: I will be happier when this tubular frame is complete; the little misalignments are starting to bug me. But, you have to admit, it looks amazing!