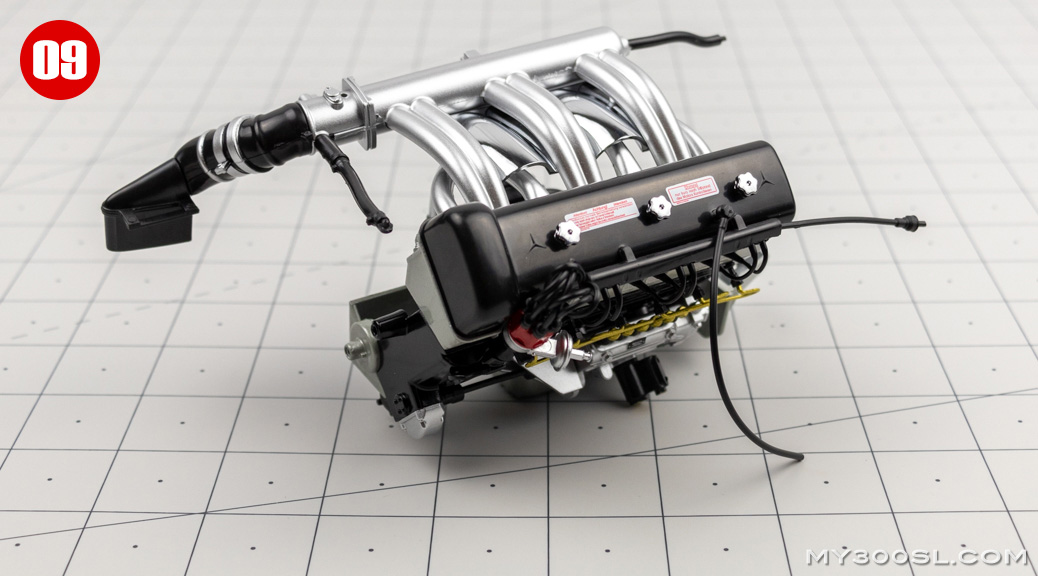 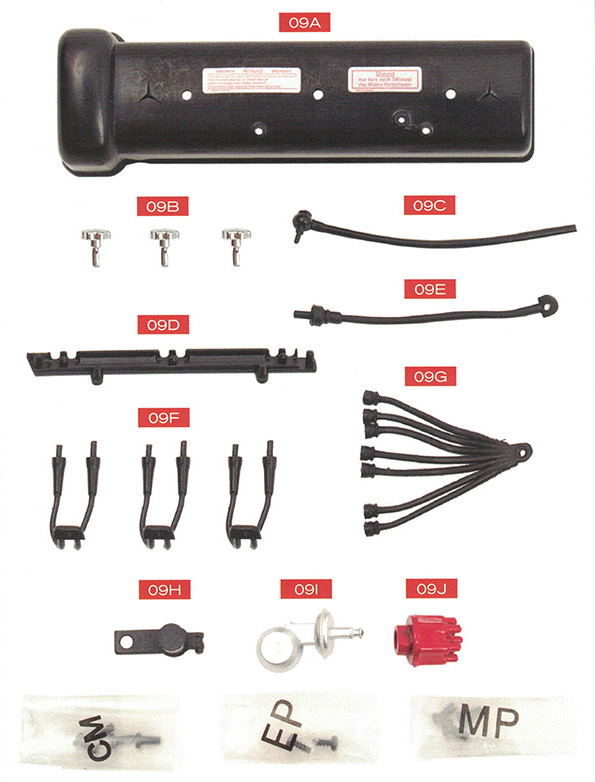 Materials: Almost everything in this phase is plastic, except the Distributor Cable, Ignition Cables, and the soft hose attached to the Cylinder Head Cable which are all soft PVC.

The Cylinder Head Cover and the Distributor

Slide the tab of the Distributor Base (with the cylinder shape pointing down) through this hole of the Engine Cylinder Head (from the previous phase), and secure with one (1) CM screw.

Even when the screw is tight, this part can be moved around a bit. Try to keep it perpendicular to the cylinder head. This is also your friendly reminder to try using 3-in-One Oil on all screws going into metal: 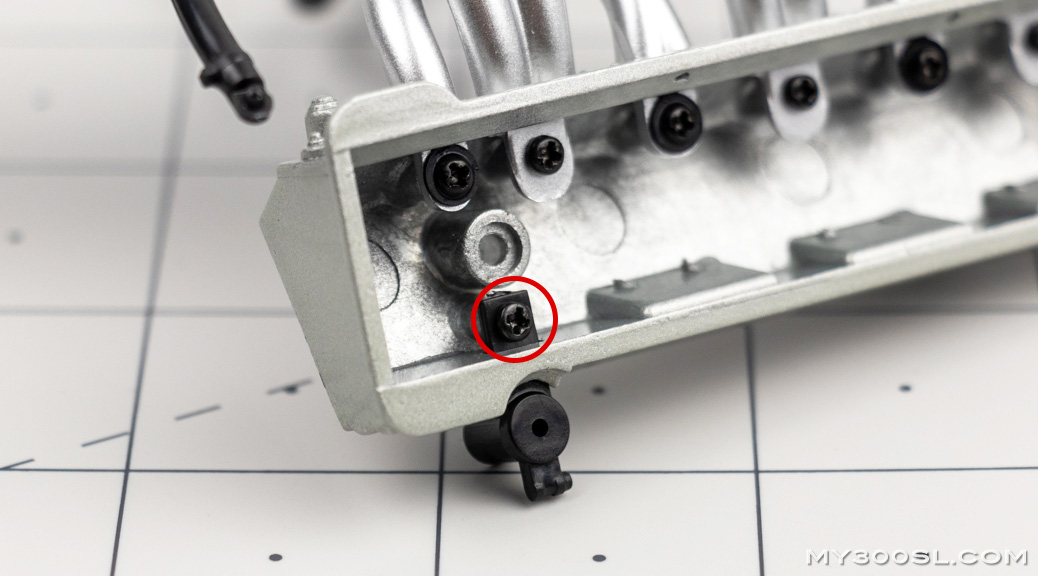 The instructions show this mounted at an angle, but it was unclear as the exact angle. Since there is a D-shaped hole in the top of the Distributor, I aligned the flat of the hole to be parallel with the cylinder head: 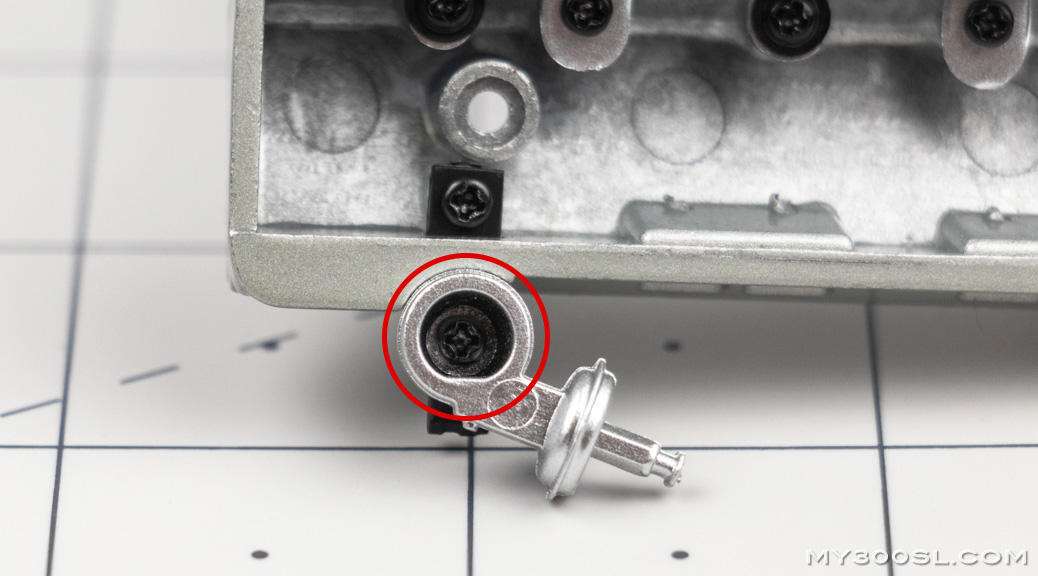 Speaking of D-shaped holes, the base of the Distributor Cap has a matching D-shape to align it to the hole. I also cut a little of the excess flashing off the cap to make this fit flush into the hole better: 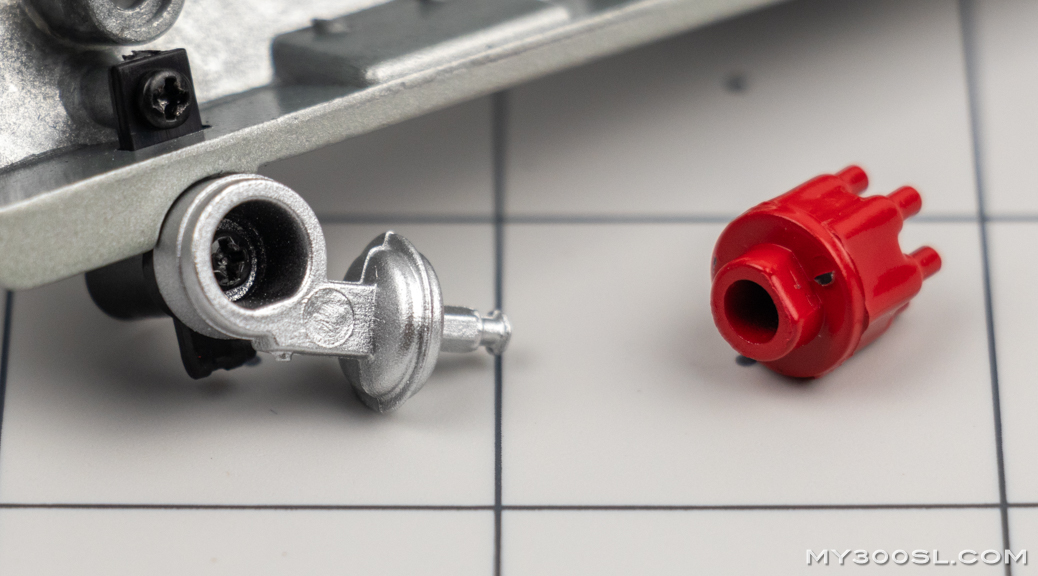 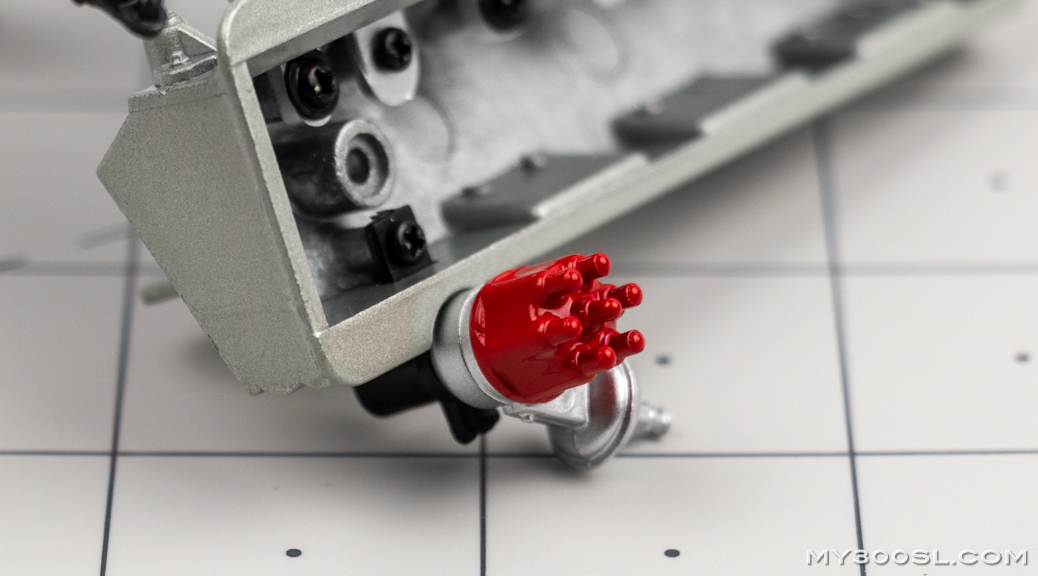 The Distributor Cap should sit flush and be aligned vertically with the rest of the distributor housing: 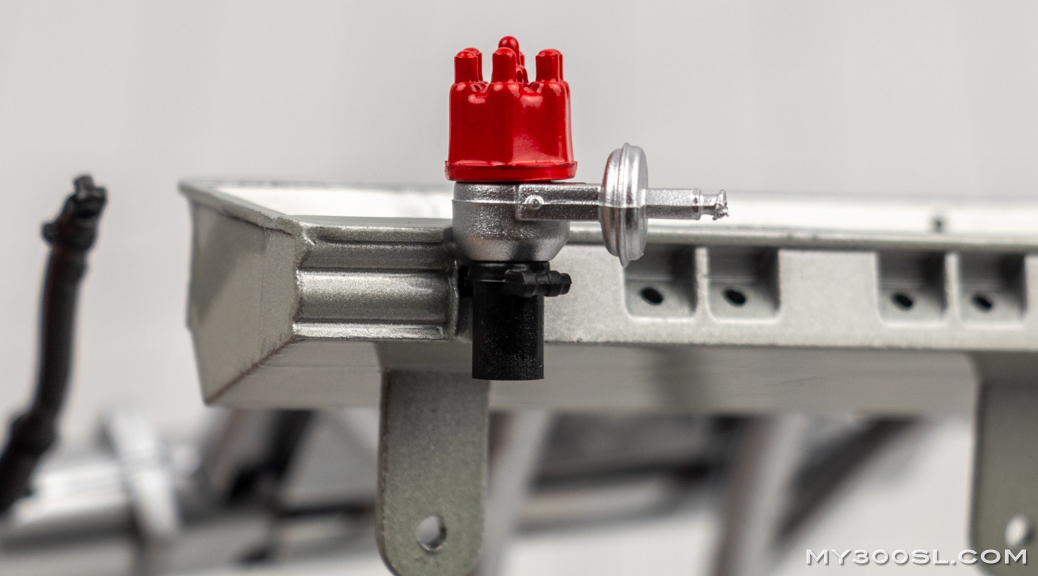 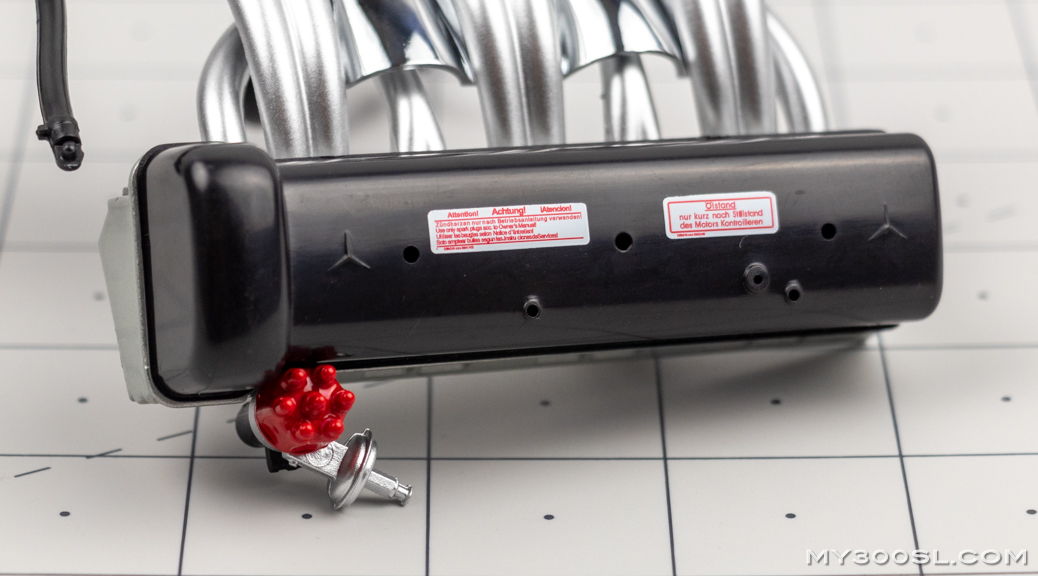 Secure the cover to the head from below with two (2) MP screws.

I always recommend pre-threading any metal screws. To do this, slowly drive the screw into the hole before attaching any parts. Next, remove the screw and blow off any metal shavings. Since the parts are zinc, but the screws are harder iron, this threads the hole. Finally, secure the parts as instructed: 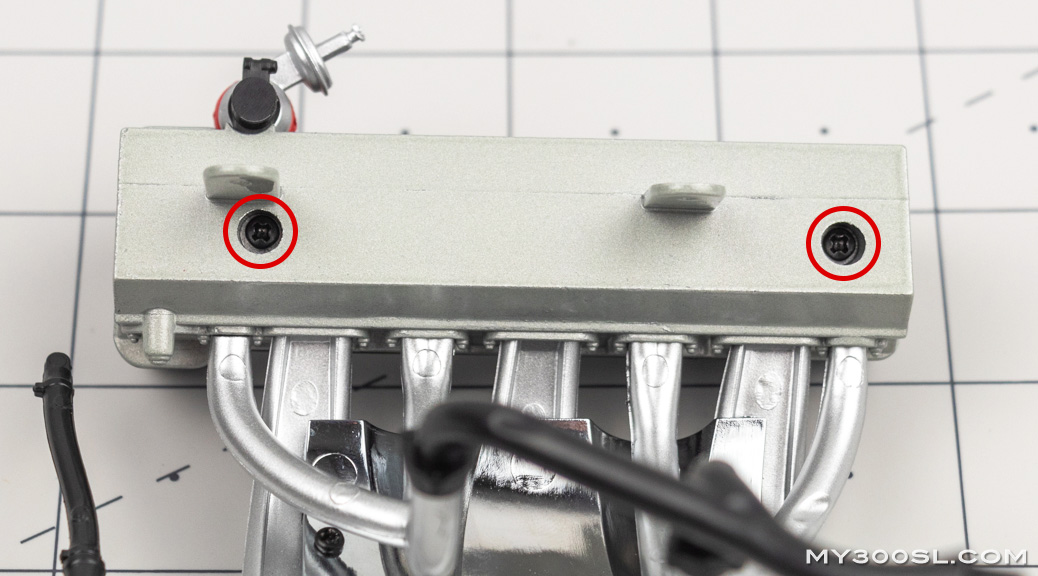 Press the three Oil Filler Caps into these matching holes of the Cylinder Head Cover.

On the real car, these are not actually oil filler caps, but retaining screws that hold the cylinder head cover in place. I tried to test fit these, but the holes just seemed a little too small and I did not want to force them in. Therefore, I used my small screwdriver to bore these holes out a bit: 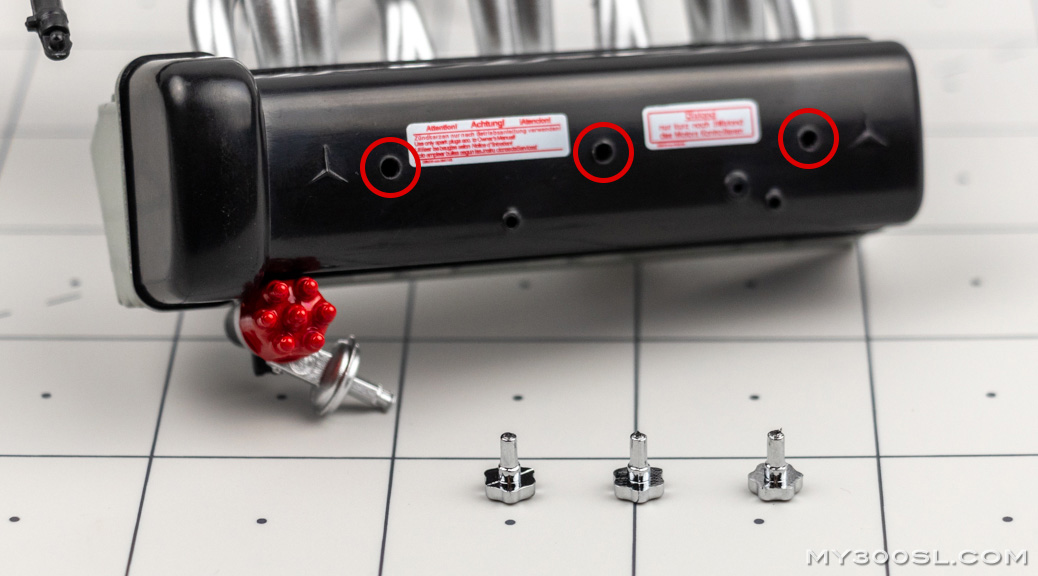 Of course, this made the holes a tiny bit too big, so I simply added a drop of super glue to each ‘Oil Filler Cap’ before seating them: 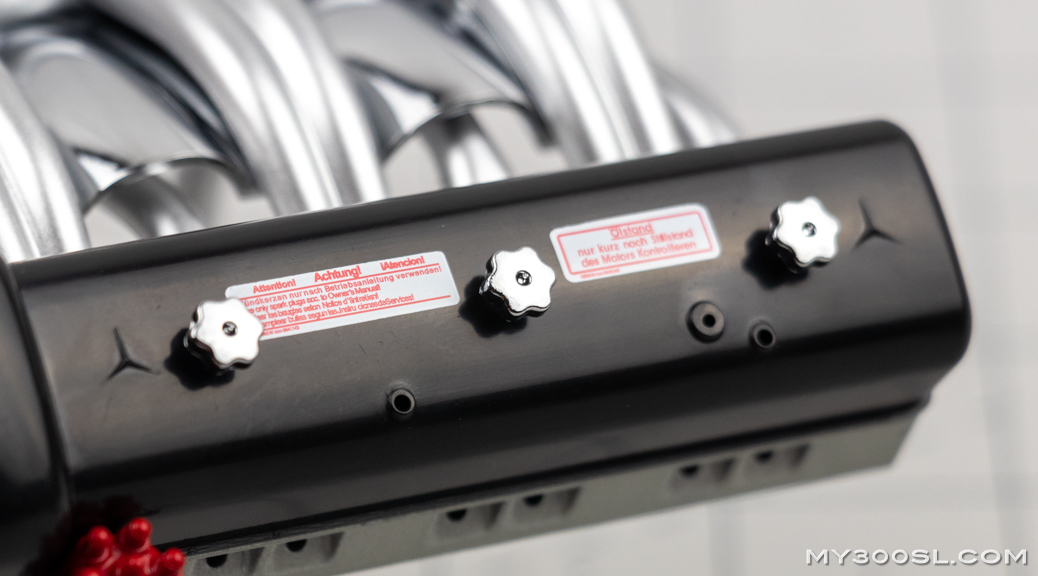 These are not supposed to go all the way in. They should stand off from the Cylinder Head Cover as seen below: 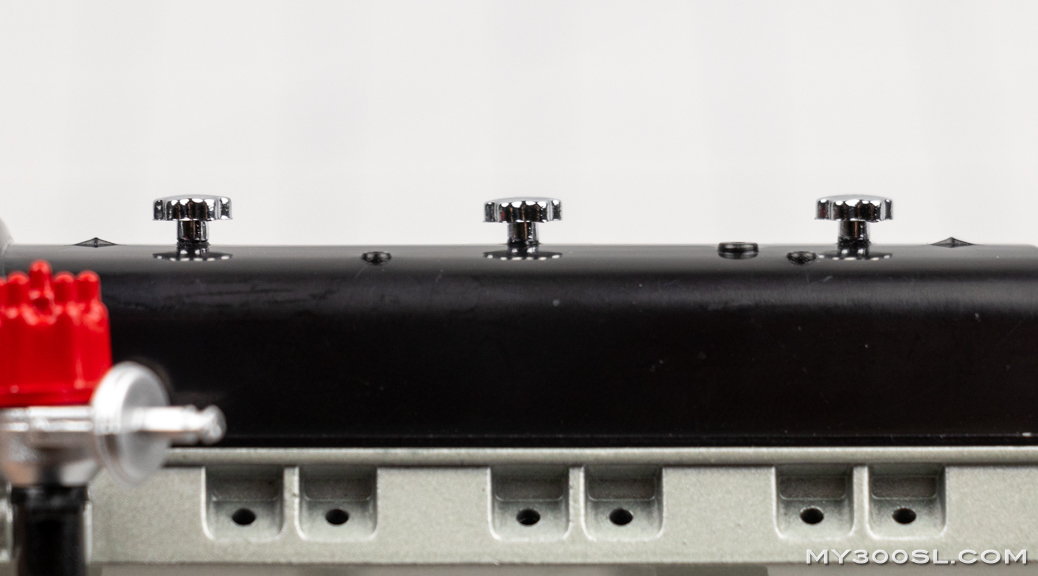 Retrieve the Left Engine Block assembly (last worked on in Phase 6) and fit this Cylinder Head assembly over these protruding posts: 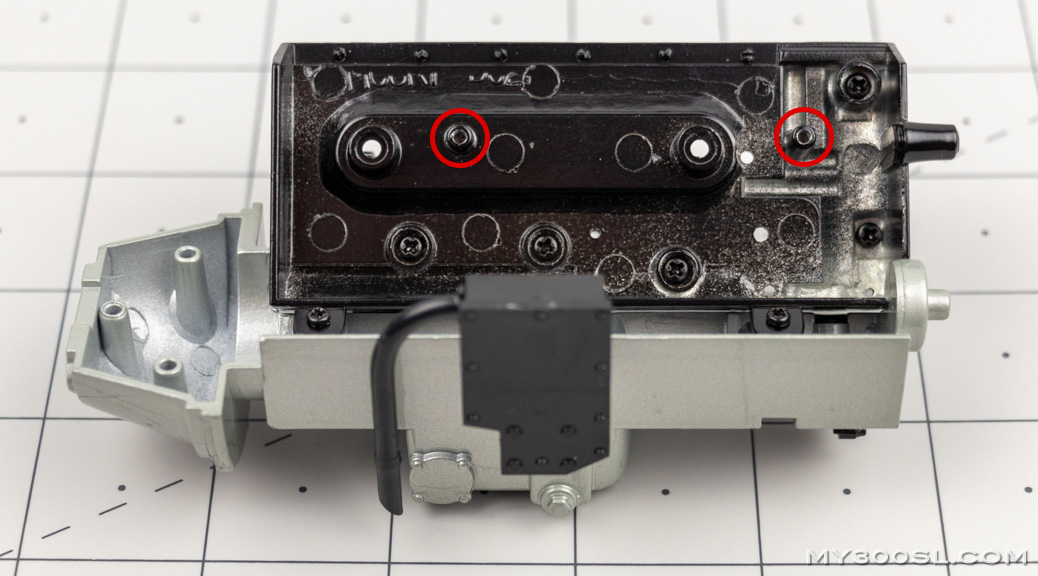 Secure the head to the block with two (2) CM screws: 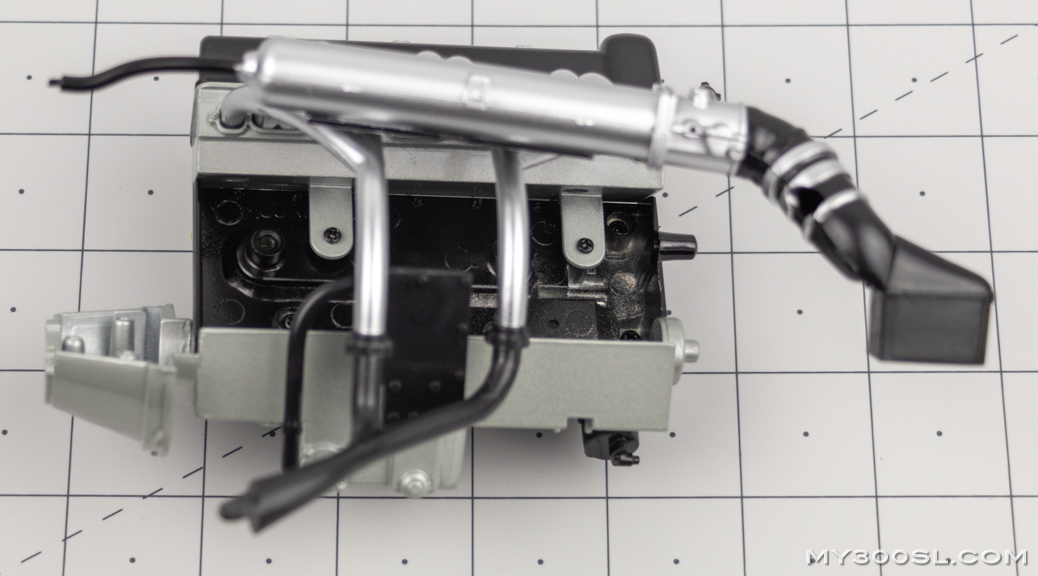 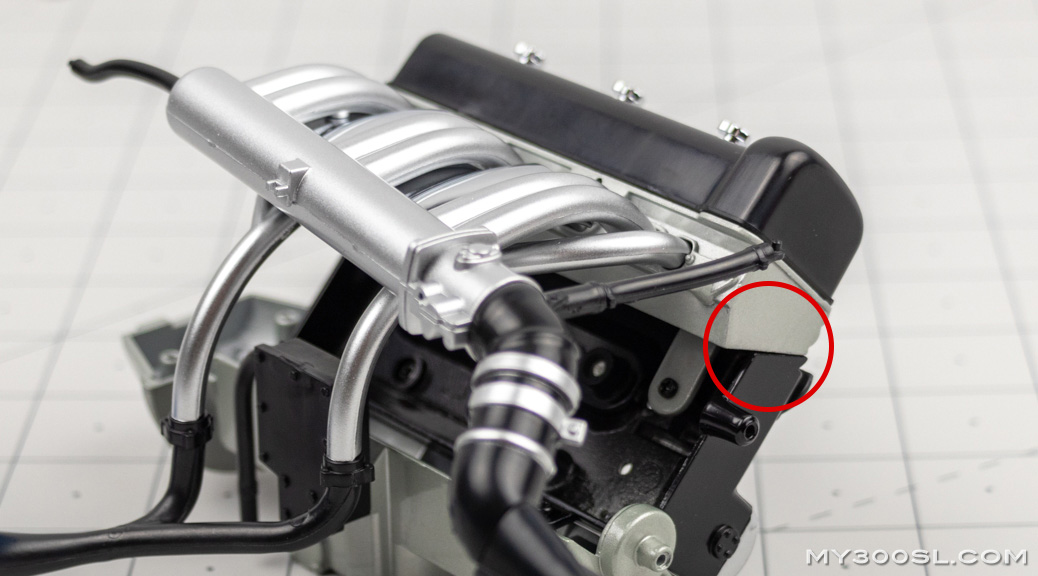 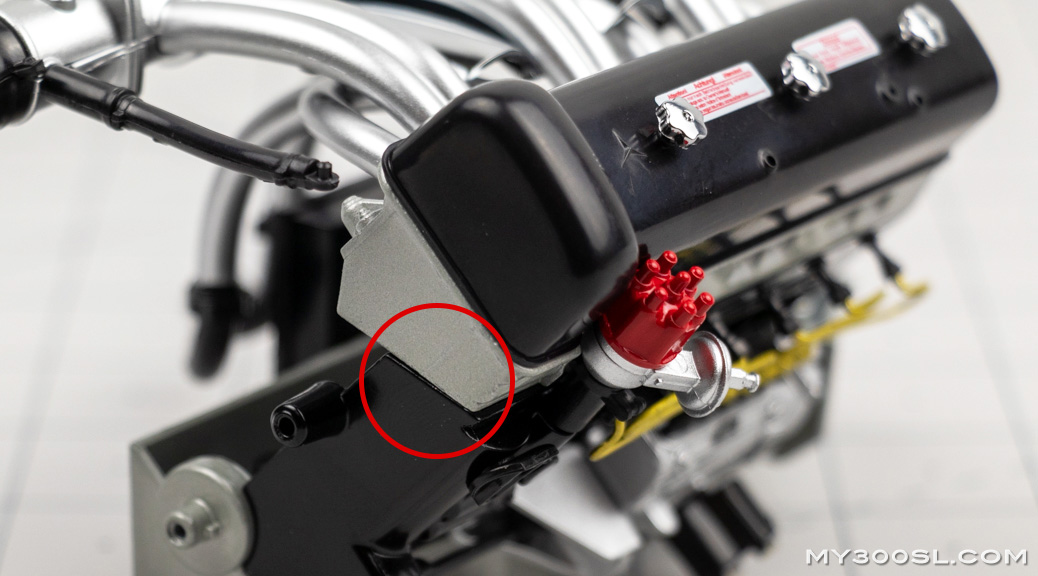 Press the three Spark Plugs onto these matching pegs of the Ignition Cable Housing as shown.

I installed two of them here to show how they fit together: 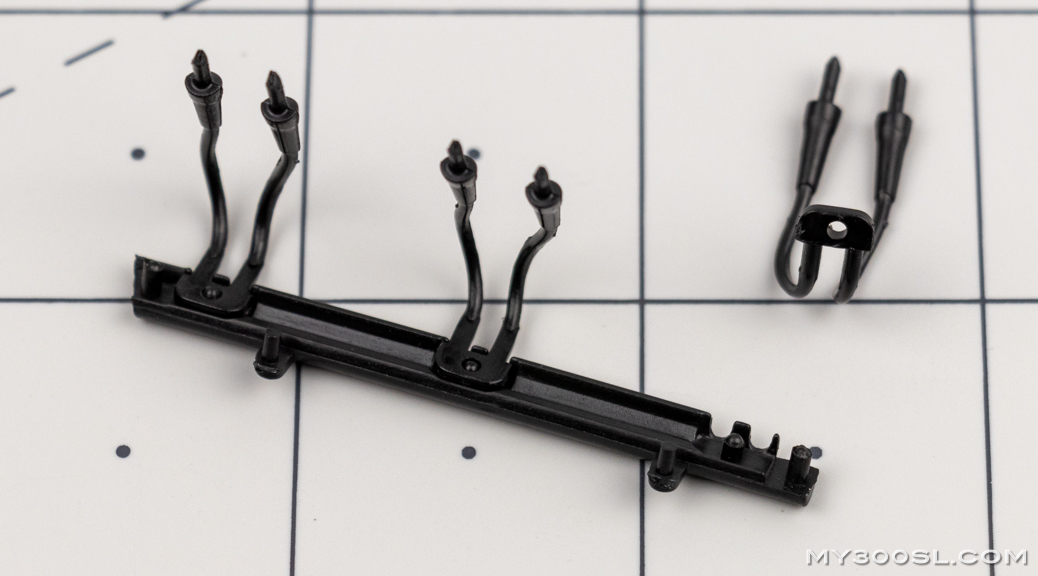 The two wires of each Spark Plug piece should fit into the matching recesses of the housing: 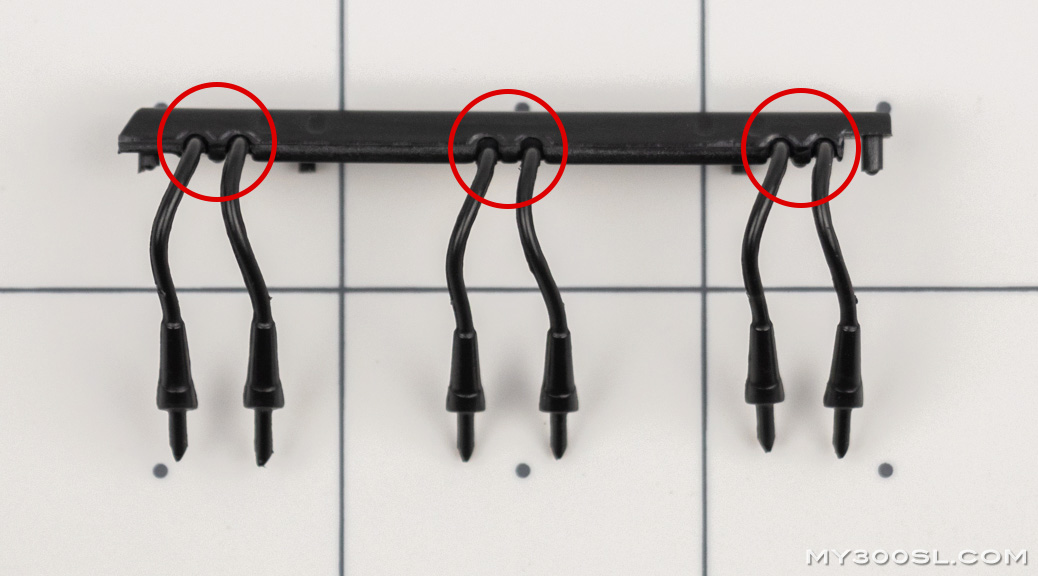 There is a correct orientation to these cables. The angle of the wires near the peg should match the angle at the end of the housing (see line below): 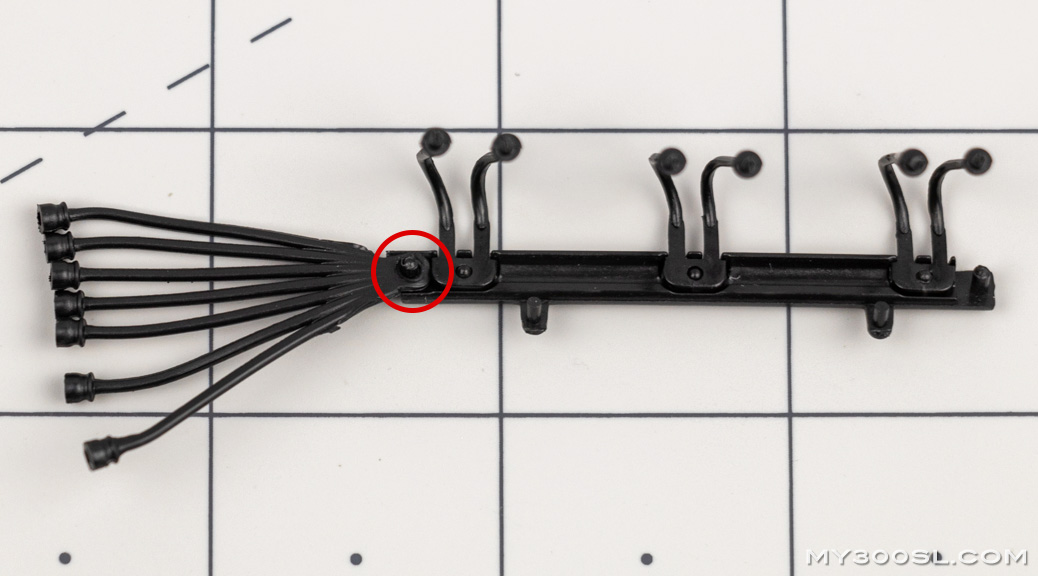 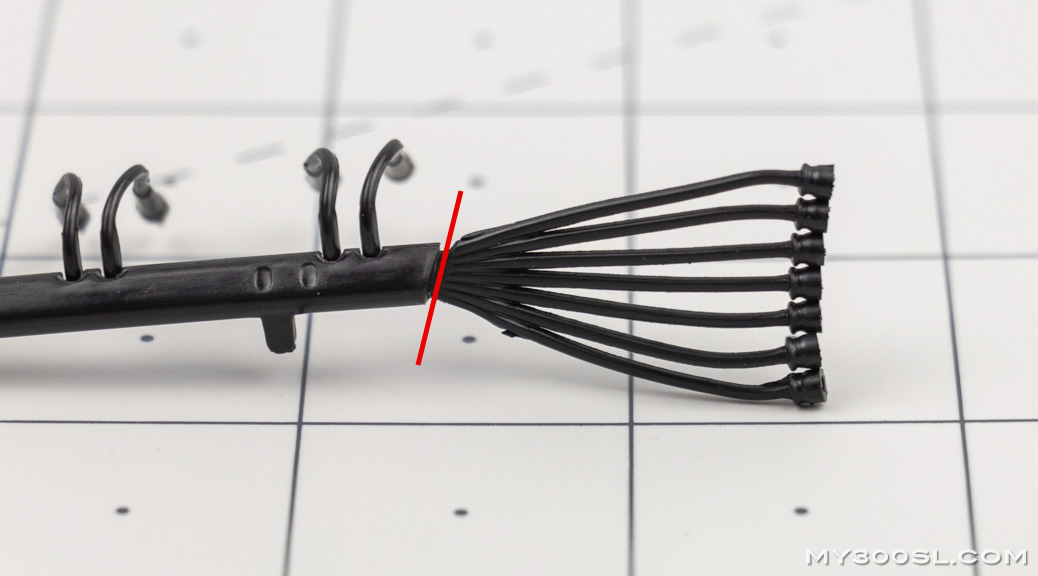 Press the Distributor Cable over this peg on the other end of the Ignition Cable Housing, as shown: 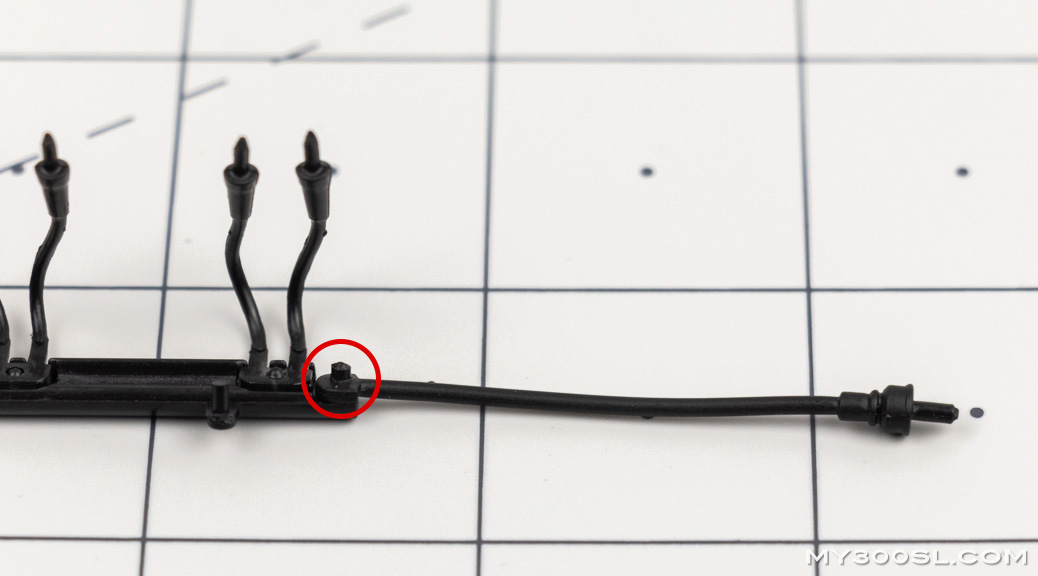 This is the completed ignition cabling assembly: 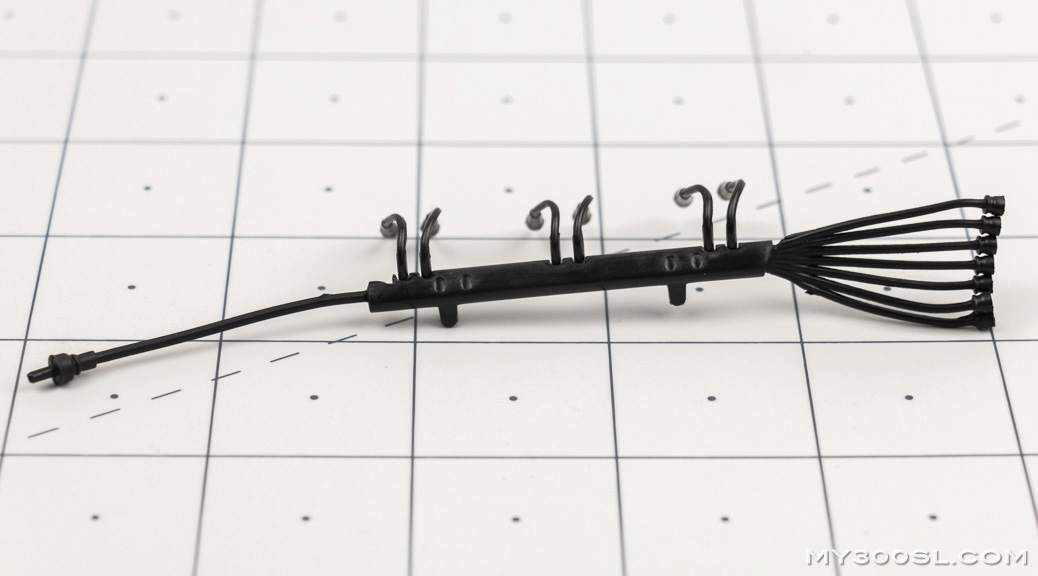 Press these two pegs of the Ignition Cable Housing into the matching holes in the Cylinder Head Cover: 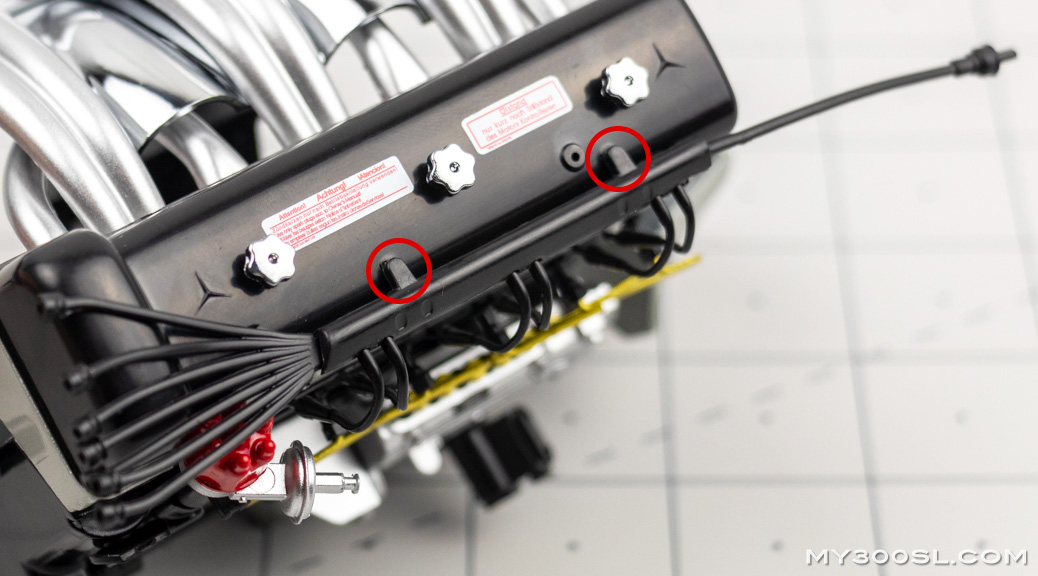 Then, insert the ends of the six Spark Plug wires into the matching holes of the Engine Cylinder Head.

Using tweezers is especially helpful here. It also seems like the ‘boots’ should seat all the way down, but their design does not allow it: 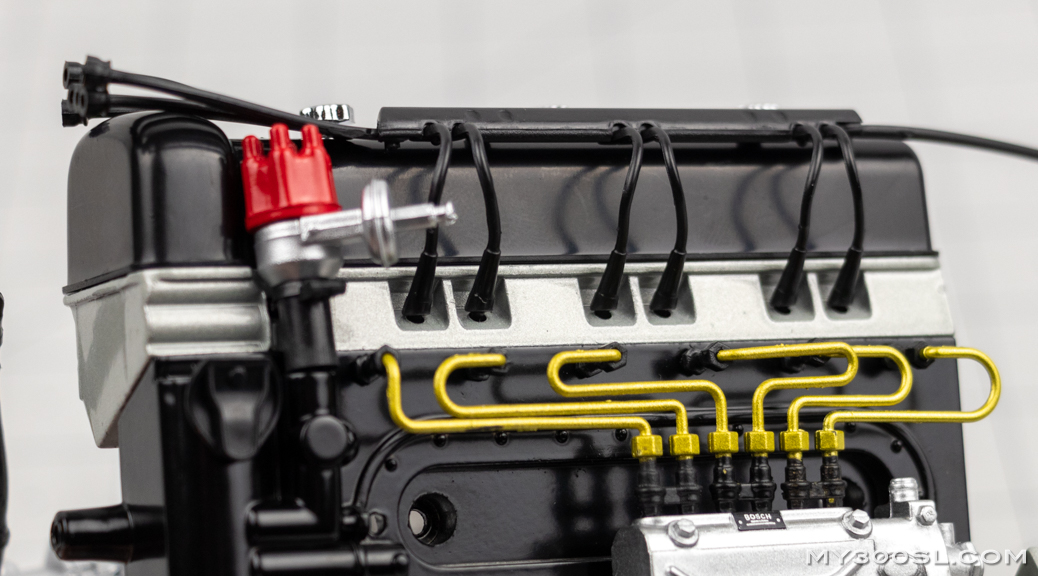 Using tweezers, connect each of the Ignition Cables to the Distributor Cap.

These cables are rubber, so they expand a little to fit snugly over the posts of the Distributor Cap. There is no real order to the cables, so I just attached them so they would be tidy: 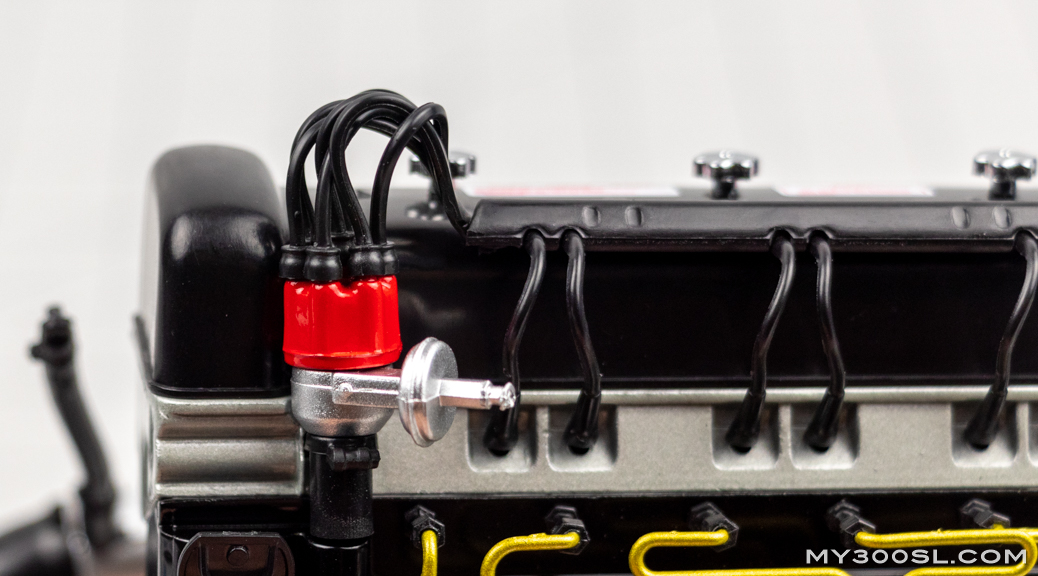 I looked up a real 300 SL engine and this hose attaches at a 45° angle towards the front of the engine, like this: 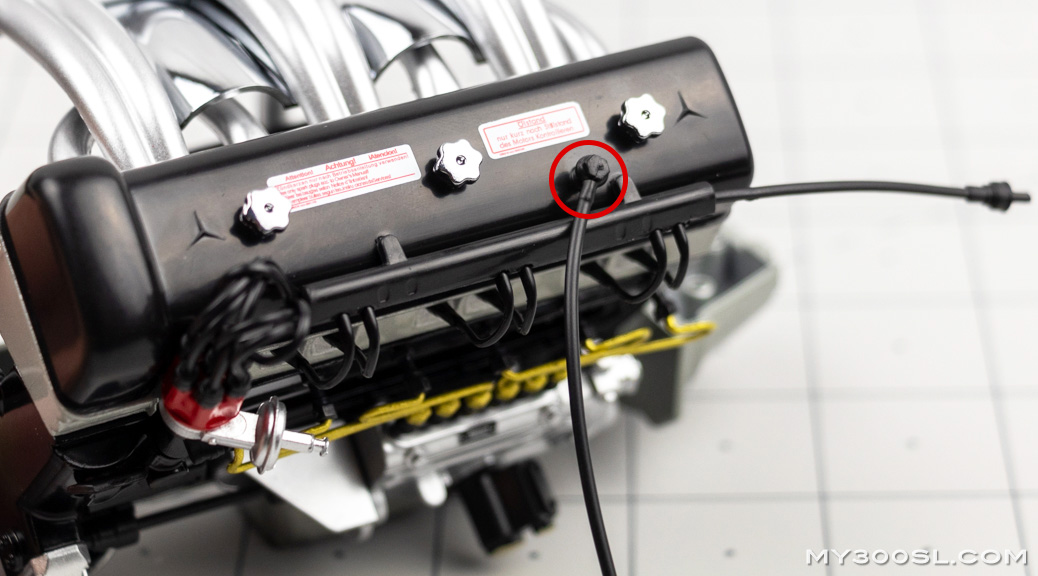 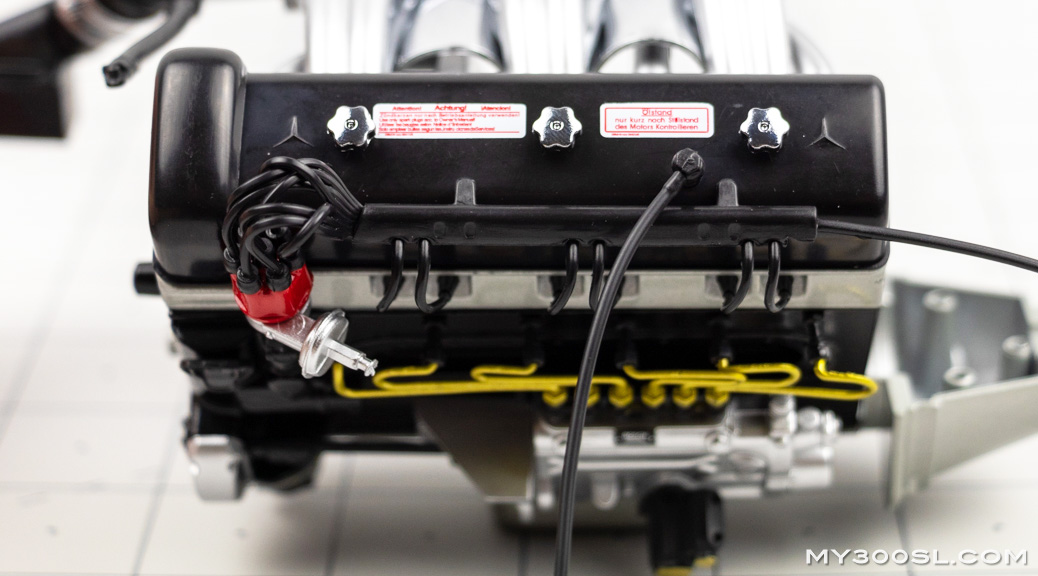 I think this might have been the longest assembly phase so far! I am pretty excited that the engine is starting to come together. By the end of the next phase, we will have the majority of the engine complete.